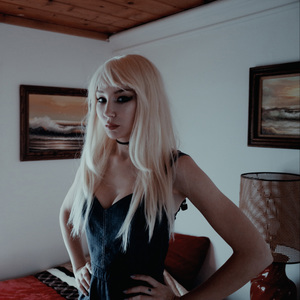 Holy Boy is the musical moniker of Los Angeles artist Helene Alexandra Jæger. Taking sonic cues from a broad palette of creative influences, including the industrial drone of Suicide, the dark side of the 60s, vintage girl bands and classic west coast hip hop, Holy Boy's describes her sound as ...

L.A. based alternative artist Holy Boy teases summer release of debut album with her own darkly cosmic take on “Riders on the Storm” by The Doors

With her signature “neon gothic” organ rock, Holy Boy (the musical moniker of Los Angeles-based artist Helene Alexandra Jæger) is adept at channeling sonic communiqués from the ghosts of rock – filtering them through modern production to conjure cinematic journeys in song format.

On Friday, March 20th, Holy Boy will release her own darkly cosmic take on “Riders on the Storm” by The Doors. The track’s drop both pays homage to the band as a creative influence and foreshadows the haunting atmosphere on her forthcoming album (to be released Aug 28, 2020).

“This song reveals such a deep truth about human existence, it relates to life and death and that really spoke to me as a writer,” says Jæger. “It’s a seeker’s song. Someone looking to find an archetypal truth about what it means to be here - and those are themes I gravitate towards.”

With her take on “Riders On The Storm”, Holy Boy reincarnates the Doors’ original into a detached, funereal version of its classic self - Hammond and Rhodes organs bring out ominous undertones, while a 70s Ace Tone Rhythm Ace drum machine runs like a somber pulse through the song.

“'Riders' felt like a kindred spirit to my songs and the way I look at the world. A sense of not quite being at home and not quite belonging on earth,” says Jæger. Expressed through her own unique, spectral lens, the original track’s foreboding undercurrent is brought to bloom.

Jæger’s voice doubled and pitched down creates an eerie phantom duet with her shadow self, culminating with the line “I’m a changeling, see me change”.

Holy Boy’s dark lens on life is expressed through a broad palette of creative influences, citing the industrial drone of Suicide, the dark side of the 60s, vintage girl bands, west coast hip hop. “The resulting sound is at once eclectic and utterly immersive; smoky and classic, yet simultaneously futuristic,” said The Line Of Best Fit about Holy Boy’s 2018 release “Elegy”.

Holy Boy’s eponymous debut EP was recorded at Ben Hillier’s (Depeche Mode, The Horrors, Blur++) Pool Studios in London and released to critical acclaim in 2017, with the single “The Blood Moon” being premiered on BBC Radio 1 and Holy Boy showcasing at festivals including CMJ, NXNE, and SXSW.